Home / Excel Bedwetting Alarm
DRI Sleeper Excel is our original Bedwetting Alarm. Excel has helped literally hundreds of thousands of children overcome bedwetting and become free from diapers. Designed by a Paediatric Expert for clinical use, this enuresis alarm is proven, effective and safe. I was a little sceptical as to how the alarm would work but within 2 weeks we had our 4yr old waking to go to the toilet. Yay!

Then just like that, she started sleeping through the night not needing the toilet or wetting the bed. We are still dry 2 months later and no alarm for 2 months!

I don’t know how or why this works but it does!

My daughter was most comfortable when we fitted the alarm just under a thin layer of material in the nappy crutch area.

Brilliant! All the best for the future.

Our just turned 7 year old has never had a dry night. Pull ups would be soaking every morning and he was a very deep sleeper. The first two weeks of using the alarm were hard, he never woke up to the sound and would be wet through, twice a night. I was starting to think it wouldn't work for us. It went down to one wake up, he'd still be wet through by the time he woke to the alarm and always refused to go to the toilet as he no longer needed to go! Again I was wondering if he was ever going to be able to be dry! Then during week 4 he had a dry night! Gradually after that he was having more dry nights than not. Hope!! We're now 12 weeks in and he's just had 14 consecutive dry nights!!! He really took control of the sensor and was doing it all himself after a few weeks. Super proud of him (and us! ) for persevering, wished we had done this sooner. What a fantastic product - the tips and after care service have been great. Thank you!

Well done for persevering and achieving 14 dry nights! We are super proud of you guys too!

Our family recently celebrated 14+ days!!! I am beyond thrilled and relieved that my son has finally mastered his nighttime bed wetting and it only took 5 weeks. He is so happy and has had 3 sleepovers already. Thank you DRI Sleeper!!

Let me tell you a little about our situation. My son is 9. He had never had a dry night for more than 2 or 3 days at a time. I thought he would out grow it. Every year at his wellness checkups, the doctor assured me he would. I’m sure he would have outgrown it on his own eventually but when?? I asked his doc the oldest bedwetting case she had personally seen and she said 12. Would that be my son?! He is a deep sleeper and for whatever reason his brain and his bladder were not speaking to each other at night. When he was 8, he expressed how unhappy he was that he couldn’t go on overnight camping trips with friends or have spend the nights. That’s when I decided it was time to be proactive. Because of all the great reviews, I got the DRI Sleeper Eclipse. After doing my research, I found that this was the best on the market. It’s wireless which was good because my kid moves around l a lot at night. Here are my tips:
1) Be committed. Someone has to be a partner with the child to hear the alarm and make sure he gets up and follows the protocol. They can’t do it alone. The alarm is loud (which is good) but I found that using a simple baby alarm PLACED AWAY FROM THE PEE ALARM worked for me to MAKE SURE I heard the alarm and could get up to help him. Don’t put it next to the pee alarm because the two radio waves will interfere and the alarm won’t go off. I also put the pee alarm on his desk away from the bed so that if he hears it before me he doesn’t get up and turn it off himself and go back to bed. You can also get an additional base for the parent’s room (suggestion for those who have not ordered yet) but I needed something ASAP so the baby monitor was my best option.
2) MacGyver the child's underwear so that there is a pocket the alarm can fit in snugly. I sewed the flaps of his tighty-whities making a j-shape and then had him put a pair on top of those. This worked great. I tried the double underwear without the pocket but the alarm shifted too much.
3) know there will be some nights that things don’t go right. A few nights the alarm didn’t go off because we forgot to turn on the alarm, it wasn’t place right, I didn’t hear it, my son got up and turn it off before I heard it. These were very rare hiccups. We were back on track the next night. I started to see a progresstion of success pretty quickly. Within a week he went from the alarm going off 2 times a night to one. Then the one moved from late night (1am) to early morning (4am). The early morning then phased out to completely dry. I used :) stickers on a calendar to track dry nights and mark what time the alarm went off. The handwriting is bad because I was doing this in the dark and was sleepy. The colors of the sticked do not mean anything.

To anyone reading this and deciding to try a pee alarm, for us it has been 100% worth the money because it worked. It’s a miracle! 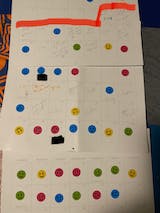 Congratulations on achieving 14 dry nights! You have made a tremendous effort to get bedwetting sorted. Thank you for sharing your experience with us; I'm sure it will help other families. We will print out your chart and put it on the Wall of Success.

Worked really well. Our child stopped bed wetting within a week. And 2 months later, not one accident. Thanks

That is a really fast result! Well done.

After almost 2 months of use I feel we still have a bit of work to do as my 8 year old son still has the occasional accidents but there has been a massive improvement since using the alarm. Prior to use he was wet every night. My son will still sometimes just turn it off and go back to sleep and not recall doing so in the morning but we'll stick with it as I believe we will have cracked it very soon.

It is great that there is significant improvement. To complete the journey you might want to consider using the over-learning technique. Instructions for this can be found in the book A Plan for DRI Nights which is in your Online Resource Kit.